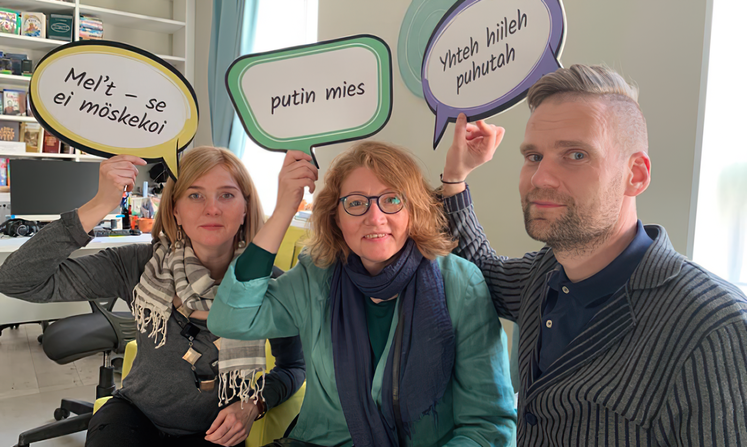 “The educational system can develop indigenous languages only in collaboration with language activists and the civil society at large” — this was one of the conclusions od the Forum of Finno-Ugric Language Activism, held on May 17-18 in Petrozavodsk (Republic of Karelia). The forum was also the closing event of the international project SANA 2019 which united civil society organisations of indigenous peoples from Karelia, Leningrad Oblast (Russian Federation), Estonia and Finland.

According to Vasily Kharitonov, founder of the network “Country of Languages”, languages must be made attractive for the youth by creating contemporary, fashionable and unique content which need not always relate to the history and culture of the respective language community. This in turn led to a lively discussion on how to find the balance between the educational system and civic activism. In the view of Natalia Antonova (House of Karelian Language) more attention should be paid to the experiences of “language nests”, parents should speak indigenous languages with their children and language learners should not be afraid of making mistakes. The role of language activists should be appreciated more by the society, but they should not be overburdened with functions that belong to the governmental educational system.

The second day of the Forum included a seminar “Community-level language activism in Karelia: experiences and opportunities” where representatives of Karelia’s ethno-cultural centres shared their experiences. As a result of the two days of work, an outcome document was adopted with recommendations for multiple stakeholders involved in language preservation and development.

Discussions held in Petrozavodsk align with the global context which relates to all of world’s indigenous peoples. Dimitry Harakka-Zaitsev, Vice Chair of the UN Permanent Forum on Indigenous Issues (UNPFII) and Aleksey Tsykarev, Director of the “Young Karelia” Centre and former member of the UNESCO Steering Committee of the International Year of Indigenous Languages 2019, confirmed that one of the key goals of the International Year is to support grassroots-level initiatives as well as recognition of the work of language activists. Experts were convinced that results of SANA 2019 project — including mini-projects and online publication of good language practices — will contribute to Finno-Ugric peoples and will strengthen positions of indigenous languages worldwide.

Svetlana Kolchurina, Director of the Association of Ethno-Cultural Centres “ECHO” — lead partner of the SANA 2019 project — drew conclusions of the project and moderated presentations of ten mini-projects that received financial support from the SANA 2019 project. These projects raised keen interest of the international audience — including the Seto workbook of word-games for children in Estonia, online course for learning the nearly extinct Livonian language in Latvia, interactive quest in the Votic museum of Leningrad Oblast, fashionable bumper stickers and office stationery in Karelian language. Special praise was reserved for the animated film “Journey of Linen from Pryazha to Paris” in Karelian language.

All these initiatives along with the existing experience of Finno-Ugric activists (such as the first Erzya-language feature film “Azor”) will be included in the interactive online publication of best Finno-Ugric practices. Even though SANA 2019 project is about to conclude, the civil society network for preserving and revitalising indigenous languages developed during the project will continue to operate and develop.

The project “Civil Society Network for Preserving and Revitalizing Indigenous Languages” unites organisations for preserving and revitalizing indigenous languages in the Baltic Sea Region and supports the goals of the International Year of Indigenous Languages. The project will partly overlap with the UN-proclaimed International Year of Indigenous Languages 2019, to the implementation of which project partners will provide substantive contributions as well as learn from worldwide good practices. The project brings together the following 7 partner organisations: Association “ECHO” (Karelia) as the lead partner, Centre of Support and Public Diplomacy of Indigenous Peoples “Young Karelia”, the Karelian Language House (Republic of Karelia), the Community of the Small-Numbered Izhorian People (Shoikula), Centre for Development of Indigenous Peoples “URALIC” and Seto Cultural Fund (Estonia) and the Saami civil society organisation “Giellabalggis” (Finland). The project is funded by the Baltic Sea NGO programme of the Nordic Council of Ministers.